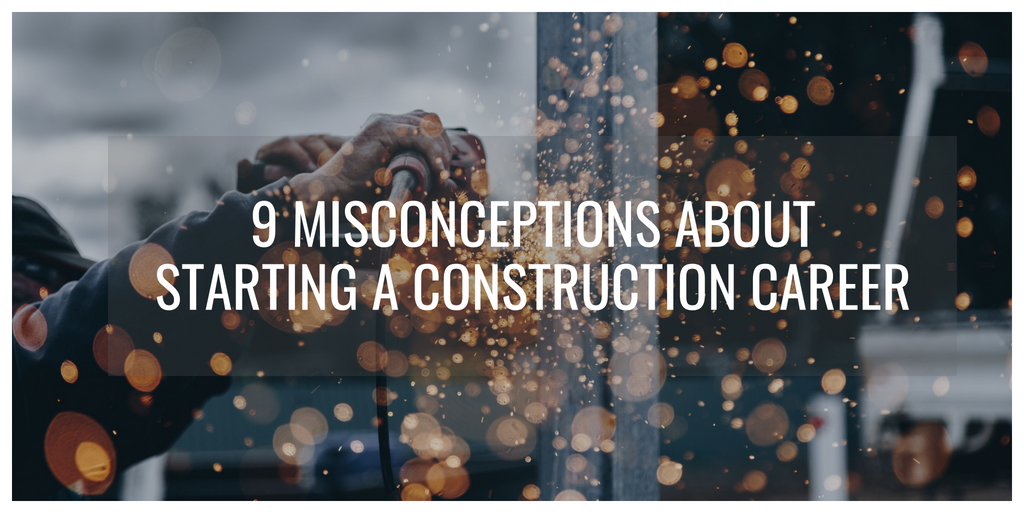 9 Misconceptions about Starting a Construction Career

By Tenley Zeisel
When young people set out to start their career, they’re often encouraged to pursue career paths that don’t include the trades. Yet, not everyone enjoys a typical 9-to-5 office position. For those who’d like to start a construction career, they’re usually met with resistance because of the misconceptions surrounding the industry. So, we’ve listed some of them so that construction doesn’t have to be thought of as a fallback choice, but rather a perfect fit.

#1 You need a degree to have a great career.

High school graduates have often been encouraged in the past to pursue a college degree instead of a trade in hopes of a higher average income. Instead, many students earn less than average and might even lose money if the burden of college debt undermines their income, according to CNBC.
Although an academic degree is a good way to obtain a great career, it’s not the only way to be successful. Pursuing a skilled trade apprenticeship is an equally respectable path.
Students can learn their craft through a highly competitive apprenticeship that can take up to five years to complete. Throughout on-the-job training, apprentices are paid to learn without incurring traditional student debt, according to Careers in Construction.
Also, construction is one of the few industries that pays for employees to receive continual training, according to Whirlwind Steel.

#2 Working in construction is a dead-end career.

With the opportunity to receive continuous training, there isn’t a shortage of career progression in construction. Based on the field you choose, you can always take on new skills and eventually move up the ladder, according to Thatcher & Associates. For example, construction project managers have a median salary of $82,790. If construction workers are interested in working through the ranks, they can be even more successful, according to Whirlwind Steel.

One stereotype about construction work is that it’s the same work day-in and day-out. But, this couldn’t be further from the truth. Construction constantly requires workers to think outside the box while solving problems dependent on the job site, according to Whirlwind Steel. Each site brings new and interesting challenges that help avoid job stagnation, according to Fieldlens.
It’s also rewarding to see the project you started and helped work on come to fruition. Knowing that you helped create a beautiful building, home or road for someone else to enjoy is incredible.

Workplace safety is a top priority for construction companies because accidents happen if employees don’t know basic safety procedures or fail to follow them on purpose, according to Crisdel. Companies have learned to develop risk management plans and host regular safety meetings to decrease construction site accidents.
Workers can also expect safety measures with their equipment because many have built-in safety features. Current safety standards and regulations have made the industry the safest it’s ever been, according to Whirlwind Steel.
The U.S. Department of Labor’s Bureau of Labor Statistics states that fatal work injuries in the private construction sectors have decreased every year since 2006.

A major misconception about construction is that it’s a man’s industry. Yet, more and more women are entering the industry to eliminate the outdated stereotype that women don’t belong in the trades. With Baby Boomers retiring and a small pool of young people entering the trades, women are vital to the industry’s future, according to Careers in Construction.
Also, with the average salary of women in construction increasing by 60 percent since 2005, it’s only going to keep improving, according to Thatcher & Associates.
Several groups like National Association of Women in Construction and Women in Property advocate for women to enter the trades. These networks also promote construction as a rewarding career for all.

This idea is definitely a misconception about construction careers. With a constant push for high school graduates to pursue academic degrees in lieu of trades, construction has fallen to a last resort for those pursuing a career, causing major labor shortages in many high demand areas across the nation.
This is especially true because its workforce is aging faster than any other industry in the country, according to Jobsite. By 2026, 20 percent of all construction workers will retire, making the demand for skilled workers high.
This is why Millennials are highly sought-after candidates for apprenticeships. With the careful guidance of a mentor, apprentices can learn the craftsmanship it takes to build functionally sound buildings, according to Careers in Construction.
With the great diversity of skill sets needed, opportunities for career advancements will always be available. “In July 2016, there were 214,000 construction job openings and the industry is projected to add 790,400 jobs by 2024,” according to Jobsite.

#9 Construction is harsh on the environment.

It’s often thought that the construction industry can be harsh on the environment because it seems that some materials aren’t recyclable or they release carbon dioxide. This is not always the case. The construction industry is constantly creating new technologies to support sustainability and environmentally friendly designs, according to Hitchcock & King.
“Construction covers all aspects of building design, including ecology, energy use, pollution and waste management,” according to Hitchcock & King. This means construction workers can make the world more sustainable for future generations.