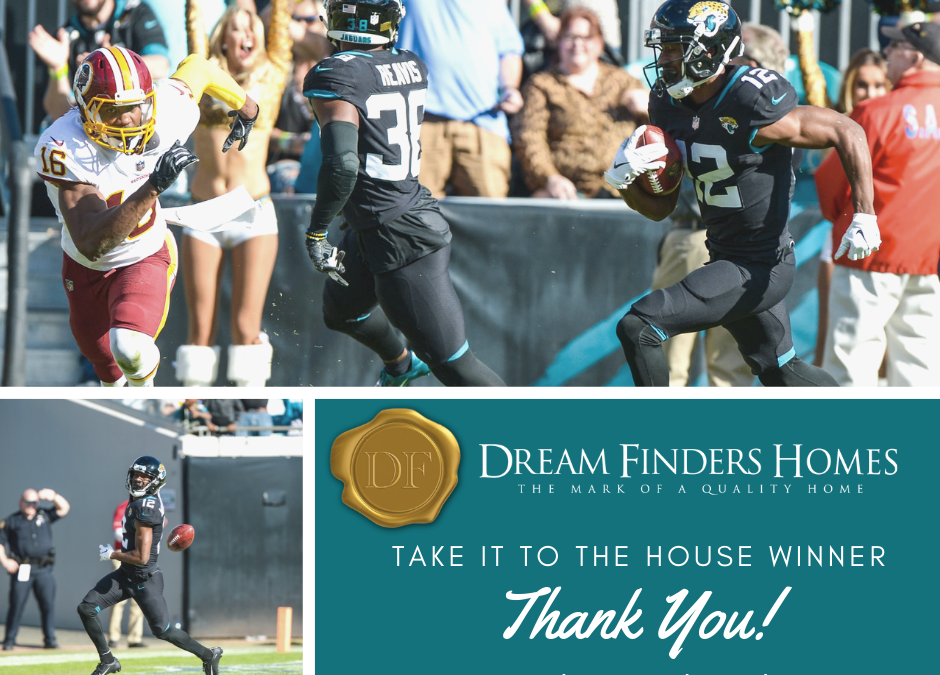 Take it to The House 2018 Winner Announced

JACKSONVILLE, FL – During Sunday’s game against the Washington Redskins, Dede Westbrook returned a punt for a touchdown earning the Mills Family $100,000 towards a Dream Finders home as part of the Take It to the House promotion.

As the Official Home Builder of the Jacksonville Jaguars, Dream Finders Homes launched the Take It to the House promotion during the 2014-2015 NFL season. The promotion encourages Jaguar fans city wide to visit one of Dream Finders’ model homes for a chance to win not only VIP Tickets to a home game, but also $100,000 towards a Dream Finders home upon a punt return by the Jaguars for a touchdown.
In 2015 Dream Finders Homes had its first Take It to the House winner, the Schaad Family, that built a beautiful home in South Jacksonville Beach. It then had its second winner nearly two years later, the Bates Family, that built their dream home in Green Cove Springs. Now, almost a year later, Dream Finders Homes is elated to announce its third winner, the Mills Family.
“The Mills family could not be more excited to build their dream home with us! They are eager to tour some of our new communities and decide where to call home!” said Jenn Kjellman, Dream Finders’ National Marketing Manager.
For Jaguar fans wondering how they can also win $100,000 towards their dream home, registration will reopen at ANY Dream Finders model in Northeast Florida in July 2019. Dream Finders picks a winner prior to each home game.
The Mills Family will be recognized at next year’s first home regular season game.
Dream Finders Homes is a private, national home builder dedicated to building the highest quality constructed homes at the most affordable prices. Since it was founded in 2008 in Jacksonville, FL, company growth has continually skyrocketed. Dream Finders currently also builds homes in Orlando, Hilton Head, Savannah, Maryland, Texas, Northern Virginia, Colorado, and has plans to continue expansion into new markets in the near future.

Tags: take it to the house